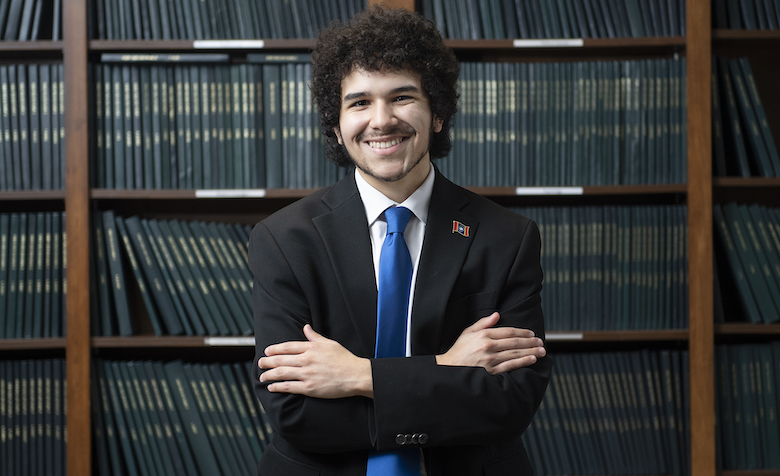 Three University of Mississippi juniors who have worked to improve access to education and to raise awareness about mental health issues have been named finalists for the prestigious Harry S. Truman Scholarship.

National finalists for the honor were announced Friday (Feb. 18). Andy Flores, junior public policy leadership and philosophy major from Ocean Springs; Alex Bush, a junior psychology major from Denver, and Jilkiah Bryant, a junior public health and health sciences major from Macon; are among them. All three are members of the university’s Sally McDonnell Barksdale Honors College.

Vivian Ibrahim, director of the UM Office of National Scholarship Advisement, has been working with the students on their applications. She is extremely proud of them.

“The students are exceptional this year,” Ibrahim said. “Mississippi has such brain drain with our young talent leaving the state.

“What we have here are young trailblazers who really want to give back to their communities and really want to improve things in the long-term. They are not just looking at right now.”

The two Mississippi students will participate in regional competitions March 18 in Nashville, and Bush will compete March 11 in Denver. No matter what happens there, the students are difference-makers, Ibrahim said.

“These are young people who are going to clearly change what our state looks like and what Colorado looks like,” Ibrahim said. “They really have already made such inroads.

“At the age of 40, I have not done what they have done. They are amazing.”

The scholarship, which memorializes the nation’s 33rd president, awards merit-based scholarships to college students who plan to pursue careers in government or elsewhere in public service. Truman Scholars receive funds for graduate or professional school, participate in leadership development activities and have special opportunities for internships and employment with the federal government.

Students selected as Truman Scholars are invited to participate in the Truman Washington Summer Institute following their junior year to deepen their understanding of the national policymaking process.

Flores is a first-generation college student from a low-income household. Flores is keenly aware of the importance of quality access to education for all Mississippians. He said his Mexican and Panamanian heritage shapes his commitment to public service.

Flores has found himself at UM in a way, thanks to the small, intimate class settings and close connections with other students he’s experienced through the Honors College and the Trent Lott Leadership Institute.

“It was all about learning and understanding myself in relationship to the world and finding some form of compassion, some form of love I didn’t get when I was younger,” Flores said. “It was just a really transformative experience.”

“I never realized how much I cared until then and it turned into a mode of self-reflection. It just saved my life there in the classroom.”

He is active in the Mississippi College Access Project and inaugural president of the university’s First Generation Network. He was also chosen as the youngest fellow of the UnidosUS Afro-Latinx Avanzando program where he will travel to Miami and Washington, D.C., to lobby for federal grants for school-based mental health programs.

Flores’ leadership is best illustrated with his creation of HelpSaveHELP. In fall 2021, the state of Mississippi announced the “One Grant” proposal, which would dissolve three state financial aid programs: MTAG, MSEG and the HELP Grant. This would affect many students and make the university much less accessible for the poorest Mississippians.

In response, Flores lobbied, traveled across the state and has given interviews to local and state media and educated state legislators on the impact of the Post-Secondary Board’s proposal. The HELP grant is still in place.

Flores hopes to pursue a law degree so he can continue to make local, state and national change and to provide access to and opportunities for success in education for all Mississippi residents. He said the funding from the scholarship would be an enormous help and he’s proud to represent UM.

“Frankly, it is important to showcase Mississippi in excellence,” Flores said. “People need to understand our identity here is compassion and we each have an active desire to make our world better. That has been our goal. 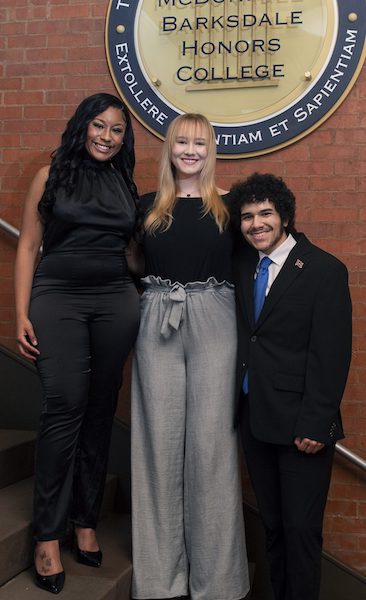 Three UM juniors, (from left) Jilkiah Bryant, Alex Bush and Andy Flores, are national finalists for a Truman Scholarship. Passionate about mental health issues and access to education, the students will compete in March against other Truman finalists for as much as $30,000 in scholarships each. Photo by Logan Kirkland/Ole Miss Digital Imaging Services

“Us three being Truman finalists is great, but there are a million people behind that effort. This accomplishment is the university’s accomplishment.”

Bush experienced a tragic loss of a parent and also a close friend as a young teen. Since then, Bush has been a passionate spokesperson for mental health awareness and suicide prevention.

“We are resilient,” Bush said of her fellow Ole Miss Truman finalists. “There have been hard things that we have been overcoming and turning into new opportunities.

She has reached more than 6,000 middle school, high school and college students in eight states and worked with media outlets to spread awareness about the issue. She has also worked on a “Teens2Colorado” public service announcement, which was nominated for an Emmy.

She hopes to complete a graduate degree in clinical psychology and promote awareness about national, state and local education policy around mental health issues.

Coming from a small high school in Denver, Bush said she found comfort at the Honors College in its intimate class settings. She credits the environment with helping her get where she stands today.

“I am coming from a graduating class in Colorado of 50 girls,” Bush said. “The Honors College has been a really great experience for me, being in a small world. That has been one of the most beneficial things for me at Ole Miss.”

Since beginning Project Powerful, Bryant has helped host more than 25 service projects in eight locations throughout the state. She is also a Catalyzing Entrepreneurship and Economic Development Innovation Scholar for the McLean Institute for Public Service and Community Engagement, Luckyday Scholar and a McDonnell Barksdale Honors Scholar in the Honors College.

“I think the university has played an important role in my self-development,” Bryant said. “The people here have become my family and they support me. Academically, the Honors College has challenged me the most.

“I have learned to be open and transparent and amplify my voice. I have met so many different people and have been challenged to become my best self.”

She aims to complete her master’s degree in public health and work to improve access to health care for Mississippi’s rural areas. She is excited about the potential of using the funds for graduate school.

“Because I come from a low-income background, the Truman Scholarship could help make graduate school more of a reality for me,” Bryant said. “Having that community, as well as the opportunity to strengthen my abilities in a community that emphasizes both academic excellence and social responsibility, is something I am looking forward to.”

Those who are interested in applying for a national scholarship should contact UM’s Office of National Scholarship Advisement by emailing onsa@olemiss.edu or check out the website.