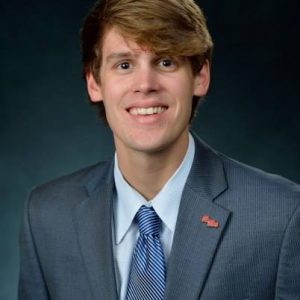 Gregory Alston currently serves as the Deputy-Director of the Policy Division for Mississippi Attorney General Lynn Fitch where he works on legislative issues, legislative appointments, policy, state regulations, opinions, and interlocal agreements. Before joining the Attorney General’s Office, he was the North Mississippi Field Representative and General Counsel for United States Senator Cindy Hyde-Smith and the late United States Senator Thad Cochran where he provided counsel and maintained strong relationships with constituents and elected officials in north Mississippi.

When and why did you decide to study Public Policy Leadership?
I decided that I wanted to study Public Policy Leadership during my senior year of high school. A mentor of mine told me about the Lott Leadership Institute and encouraged me to apply. I looked into the program and eventually decided to apply, because I wanted to learn about policy making and leadership while also being in a major that would build my political skills and relationships. I had been interested in politics and leadership for a couple years, and I wanted to pursue a degree where I would learn meaningful information. But I also wanted to be in a department where I would gain skills that would shape me into a competitive person in the professional world. The Lott Leadership Institute encompasses all of those different values while providing a valuable degree at graduation that has prepared the students to go out and fulfill leadership roles in society.

The Lott Leadership Institute played a major role in forming me to not only be a leader but a leader that can work with others to effectively get things done for our students. When you are in a leadership position, you have to listen to your constituents and advocate for their voice. Leaders also have to stand up for what is right and for what they believe in.

The Lott Leadership Institute and Senator Trent Lott played a big role in my election.

When you have a leader like Senator Lott who is able to provide his own personal experience in leadership at one of the highest levels of government as well, it can only serve as a benefit to the students like me who are interested in leadership positions whether that be in student government or in the professional world. I will forever be grateful to Senator Lott for his advice when I was leading the student body.

I cannot talk about service without also mentioning the service opportunities that the Lott Leadership Institute is able to provide. I boarded an airplane for the first time and went to South Africa with fellow public policy students my sophomore year to assist with building a garden at an AIDS orphanage. The Lott Leadership Institute places policy, leadership, and service training on a world class stage.

During my freshman year of college at Ole Miss, I decided that I wanted to pursue work on political campaigns in the state of Mississippi. Political campaigns have been an important part of my career. I do not think I would be working for a United States Senator without having first getting involved with political campaigns. The first campaign I ever volunteered on was Alan Nunnelee’s campaign for United States Congress. I was not in a paid position, but the experience I got from that campaign was so important to me. Since then I have had the opportunity to serve as a member of the campaign staff for both of State Treasurer Lynn Fitch’s campaigns, Governor Phil Bryant’s re-election campaign, and a staff member of Governor Phil Bryant’s inauguration team. The most important campaign that I worked on was Senator Thad Cochran’s 2014 re-election campaign. This campaign was perhaps the most important of my campaign experience and would be a catapult to later working for him. Being able to serve Senator Cochran in his last campaign and eventually obtain an intern position in his Oxford office is very valuable to me.

Please talk about your career path since graduation and career goals at this point.
I enrolled at the University of Mississippi School of Law where I was very blessed to receive opportunities to serve and lead the student body. I was elected a Senator, then Treasurer, and then President of the law school student body in 2016-17. Being able to serve as LSSB President was a highlight of my law school experience. I also was very fortunate to serve as 2 years as the CEO of the Business Law Network at Ole Miss, which is housed in the Business Law Institute at the law school. The Business Law Network is a student organization that places a focus on connecting law students who are interested in business law with practitioners in the business law field and puts a tangible focus on connecting those students with job opportunities.

After graduating from law school and passing the Mississippi bar, I continued to work for Senator Thad Cochran as I had done in law school where I interned in his Oxford office. I served as his North Mississippi Field Representative where I was eventually named General Counsel in the Office of Senator Thad Cochran. When Senator Cochran retired, I continued to serve in the same position as the North Mississippi Field Representative and General Counsel to US Senator Cindy Hyde-Smith. In this position, I was able to represent the Senator at meetings and events in the North Mississippi region, but was able to provide legal advice on different issues that arise within the Senator’s office. Serving in these roles to Senator Cochran and Senator Hyde-Smith has been one of the greatest honors of my life.